Learn about different diseases and vaccinations to keep your fur baby healthy and happy!

Feline viral upper respiratory tract disease is typified by signs of runny nose, runny eyes,  salivation, and/or oral ulcerations. The principal causative agents are feline herpesvirus type 1 (FHV-1 ) and feline calicivirus (FCV).  These viruses are cat specific and pose no known human risk.   Clinical signs vary depending on factors such as strain virulence and the age of the affected cat. In some cases infection is there are no symptoms, however in many others, following an incubation period of 2-10 days, there are typical signs of oral erosions (resulting in hypersalivation), sneezing and nasal discharge accompanied by fever and anorexia. More severe cases can occur, particularly in young kittens, with signs of difficulty breathing, coughing, fever and depression. Acute upper respiratory tract disease is the most common manifestation of FHV infection. The respiratory signs caused by FHV-1 are often broadly similar but generally more severe than those caused by FCV. Typical signs include conjunctivitis, ocular discharge, sneezing, nasal discharge, salivation, pharyngitis, lethargy, fever, anorexia and sometimes coughing. These signs can last from a few days to a few weeks. A less common manifestation of chronic FHV infection is conjunctivitis and keratitis. FHV infection causes the development of multiple small branching corneal ulcers (called ‘dendritic keratitis’) which is considered diagnostic of FHV infection. Rarely, chronic FHV infection can result in skin inflammation and ulceration. This is most commonly seen around the nose and mouth but can affect other areas such as the front legs.

Despite the widespread use of vaccines, feline leukemia virus (FeLV) remains one of the most important causes of illness and death in cats. It causes a variety of malignancies, but persistent infection can also cause severe immunosuppression and profound anemia. The virus is present worldwide and infects domestic cats and a few other Felidae. The incidence of FeLV infection is directly related to the population density of cats. Infection rates are highest in catteries and households with multiple cats, especially when cats have access to the outdoors. Persistently infected, healthy cats are the major reservoir of FeLV. Carriers excrete large quantities of virus in saliva. Lesser amounts of virus are excreted in tears, urine, and feces. Oronasal contact with infectious saliva or urine is the most likely mode of transmission. Nose-to-nose contact, mutual grooming, and shared litter trays and food dishes facilitate transmission. Bite wounds from infected cats are an efficient mode of transmission but occur relatively infrequently in cats kept indoors 100% of the time. Bites may be a more important mode of transmission in indoor-outdoor cats.  Age resistance is significant. Young kittens are much more susceptible than adults. FeLV-related disorders are numerous and include immunosuppression, cancer, anemia, immune-mediated diseases, reproductive problems, and intestinal inflammation.

Rabies is an acute, progressive viral encephalomyelitis that principally affects carnivores and bats, although it can affect any mammal. The disease is fatal, once clinical signs appear. Rabies is present in many countries worldwide, although a number of countries are free of the disease due either to successful elimination programs or to their island status and enforcement of rigorous quarantine regulations. For many years, skunks were the most commonly reported rabid animal in the USA, but since 1990, rabid raccoons have been the most numerous. Skunk, raccoon, and fox rabies are each found in fairly distinct geographic regions of North America, although some overlap occurs. Bat rabies is distributed throughout the Americas. The vampire bat is an important reservoir in Latin America, and is the source of multiple outbreaks in cattle, as well as in humans, particularly in parts of Amazonia. Transmission almost always occurs via introduction of virus-laden saliva into tissues, usually by the bite of a rabid animal. Although much less likely, it is possible for virus from saliva, salivary glands, or brain to cause infection by entering the body through fresh wounds or intact mucous membranes. Usually, saliva is infectious at the time that clinical signs occur, but it is possible for domestic dogs, cats, and ferrets to shed virus for several days before onset of clinical signs. The incubation period is both prolonged and variable. Typically, the virus remains at the inoculation site for a considerable time. The unusual length of the incubation period helps to explain the effective action of local infiltration of rabies immune globulin during human postexposure prophylaxis, even days after exposure. Most rabies cases in dogs develop within 21–80 days after exposure, but the incubation period may be shorter or considerably longer. The virus travels via the peripheral nerves to the spinal cord and ascends to the brain. After reaching the brain, the virus travels via peripheral nerves to the salivary glands. If an animal is capable of transmitting rabies via its saliva, virus will be detectable in the brain. Virus is shed intermittently in the saliva. Clinical signs of rabies are rarely definitive. Rabid animals of all species usually exhibit typical signs of nervous system disturbance, with minor variations among species. The most reliable signs, regardless of species, are acute behavioral changes and unexplained progressive paralysis. Behavioral changes may include sudden anorexia, signs of apprehension or nervousness, irritability, and hyperexcitability. The animal may seek solitude. Ataxia, altered vocalization and changes in temperament are apparent. Uncharacteristic aggressiveness may develop—a normally docile animal may suddenly become vicious. Commonly, rabid wild animals may lose their fear of humans, and species that are normally nocturnal may be seen wandering about during the daytime. The term “furious rabies” refers to animals in which aggression (the acute neural excitative phase) is pronounced. “Dumb or paralytic rabies” refers to animals in which the behavioral changes are minimal, and the disease is manifest principally by paralysis.

Is your cat or kitten up to date with their vaccinations?

Contact us to schedule an appointment or check on your pet’s records with our client portal. 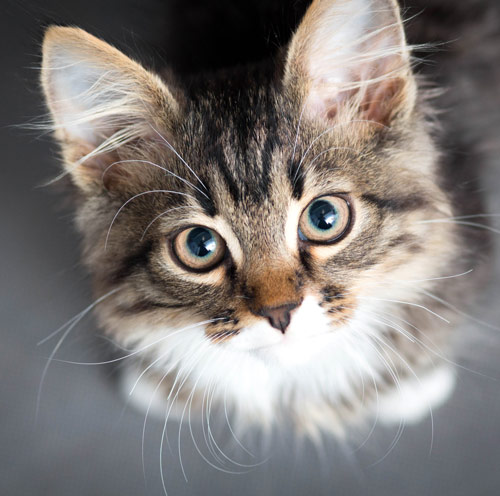 Does your pet need vaccinations?

Penny Paws believes every owner and pet should have access to medications which is why we host weekly mobile vaccinations clinics. Click below to find a clinic near you!

First time using a vet and this place was great…more than what I expected. Friendly doctor and nurses, everything was explained to my understanding and was very pleased with the results. I definitely recommend you to come here for your pet :)…well be using this clinc in the future and all my visits!

- Gabriela
Find a Clinic Near you